Totteridge F.C. came about in 1996 when the Wycombe Marsh R.B.L. Under 12's team disbanded after a number of unsuccessful season's (just 1 point was won in previous three season's!). 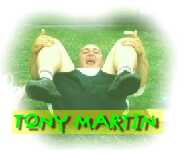 A few of the players including Paul Jemmett, Michael Chapman, Gary Plumridge & Chris Huggins all wished to continue playing and so parents Peter Jemmett, Eric Chapman and Steve Plumridge formed a new club to provide football opportunities to any youngsters, not just based on ability, who wished to play.

Peter was elected as the Honorary Secretary and Tony Martin was recruited as Chairman and Team Manager while Mandie Best took on the role of Treasurer, along with Eric and Steve they were also joined by Glyn Tucker to form the first committee and our inaugural meeting was held on 8th July 1996 at the Totteridge & District Social Club.

Tony arranged an initial sponsorship with High Wycombe RAFA club which got the club off the ground by purchasing a new Umbro 'sky blue' kit and paying all the affiliation fees, the committee also accepted an invitation to hold its future club meetings and functions at their Totteridge Road base.

The club adopted the name Totteridge in the hope to draw new players from this large residential area of High Wycombe. 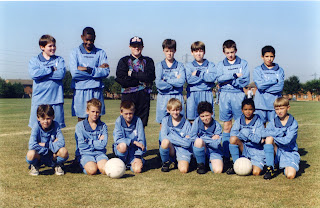 This was the first and largely unsuccessful season for the new UNDER 13's team.

Kicking off the season with a 0-14 defeat away to the eventual champions Mandeville Youth, just 2 points were gained with draws against Risborough Colts and Prestwood Colts as the team finished bottom of the Wycombe & South Bucks Minor League (WSBML), early exits from all cup competitions completed a tough opening campaign.

However, the season did finish on a high note with the team winning the Wycombe District Council overall Under 13's Fairplay Shield during a presentation evening held at Wycombe Wanderers.

Some facts from our first season: Scott Sutherby was the first registered player; Wayne Bennett scored our first ever league goal from the penalty spot; the club’s membership was 18 players; our turnover for the season was just a little over £1000

With only a few players from the previous season’s team returning, the club had to withdraw from the WSBML just a matter of days before the new season kicked-off.

Eric Chapman had taken over the Chairmanship believing his only function would be to wind up the club, but over the pre-season summer months younger players had started training and this led to the birth of an UNDER 9's side who entered the Thames Valley Friendly League (TVFL). 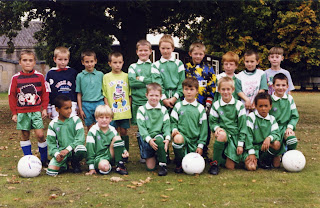 In the week leading up to the first game away to Chalfont Saints we had just 8 players, but following an advert placed in the Bucks Free Press we not only went with a squad of 17 players (see photo) but also met Alan Putman, Kevin Dawson and John Ambrose all who would become very instrumental in the early stages of development of the club. We hadn’t reckoned on such a good response and didn’t have enough kits to go around so had to request that the new players turn up in green tee shirts!

Following a directive from the Berks & Bucks F.A. not allowing players of this age to play competitive 11-a-side football the club decided to withdraw from the TVFL and joined the South Bucks Mini Soccer Conference (SBMSC) in Jan 1998 with Alan Putman taking over the team management and Tony Martin assisting. 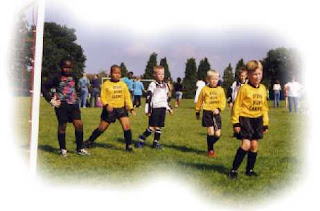 YELLOW & GREEN - Club funds were at an extremely low level so a fund raising drive was undertaken to buy the mini goals necessary to play these games. Besides obtaining a grant from the Wycombe District Council and selling bird feeders, this included an infamous 10+ mile sponsored walk mis-lead by John Ambrose through muddy fields and down wrong turns but this in itself raised over £700.00! We also secured sponsorship of the old Wycombe Marsh 'green' kit from Costcutters in Micklefield which allowed for extra kits to be bought (no need for green T-shirts!), plus the club also received a 2nd hand 'yellow' kit gifted by one of the parents and these two ‘donated’ colours were adopted as the standard club colours.

The club was amongst the first in the area to have properly marked out mini pitches after working with the Wycombe District Council to provide pitches at Totteridge Rec., a fact often remarked upon by visiting clubs who were at that time still using cones.

By the end of the season the number of players joining the club, many who completed more than a decade with us, led to the formation of an UNDER 8's 'yellow' team under the guidance team manager John Ambrose .... The club had really taken off!!

The rapid expansion of the club is well demonstrated by the fact that the awards evening had been planned, as in the previous year, for the RAFA club, but leading up to the event the numbers wishing to attend far outstripped the capacity of the venue necessitating in a last minute change to the Micklefield Community Centre – literally the whole event was re-planned and moved within 24 hours to accommodate everyone!

The season started with a change at the administration level as Kevin Dawson was voted in as Treasurer and Mick Carlton took over as team manager of the UNDER 9's with the club moving its meetings and functions to the Micklefield Community Centre. The club continued with the same two teams both playing in the SBMSC at UNDER 9's and UNDER 10's age groups.

The season ended on a high when Mick Carlton's UNDER 9's battled through the qualifying games to reach the final of the Bourne End 6-a-side tournament to finish runners-up to give the club its first brush with playing success.

A new team was introduced in an UNDER 9's managed by Jamie Stone who joined Mick Carlton’s UNDER 10's in the SBMSC.

The UNDER 11's led by Alan Putman won a pre-season 11-a-side tournament at Holmer Green beating Aylesbury United 5-3 in a thrilling final to take the club's first competitive title and entered into the WSBML full of optimism, they were challenging for promotion throughout the season failing in the last few games to slip to 4th.

Up to this season all games had been played at Totteridge recreation ground (Redford's) but the UNDER 11's opted to move their league games to the smaller pitch at Hatters Lane School to start a long association with what is now Highcrest Community School.

Popular posts from this blog 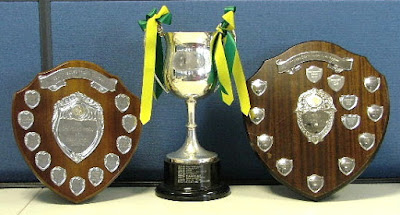 CHAMPION YEARS:2003-04 It just keeps getting better, 2 Championships and a Cup win!It would seem that there was no stopping TFC from scoring and leading the way was UNDER 10's hot shot Ashley Goldie with a majestic 49 goals to his name alone in the SBMSC before he was 'spotted' by the Wycombe Wanderers School of excellence.But it was the league teams making all the headlines ....
Mick Carlton's UNDER 14's continued where they left off the previous season, winning their first 15 league games to set an almost unbreakable sequence of 23 consecutive wins. The division 3 championship was claimed in style by a massive 9 clear points from second place Bedgrove Athletic and a successful season was rounded off  by winning both the Harefield United and Chiltern Athleic tournaments. But there was a bad feeling throughout the club when the team boycotted the club events and made a controversial move to play their 'home' games at Hedsor Social Club in Bourne End, this wa…
Read more

INTO THE NEW MILLENNIUM:2000-01Alan Putman's team of the previous season disbanded following a breakaway by a former coach to set up a new club but an UNDER 18's youth team, including some returning founder players, managed by Stuart Anning was introduced as the club entered the South Bucks Youth League (SBYL) for the first time, they found life difficult against established sides and struggled for most of the season to finish bottom with 9 points.

Mick Carlton's UNDER 11's (see photo) also moved into league football joining the WSBML division 2 and although playing some attractive football finished second from bottom to become the first TFC team to be relegated.

Another new team saw Ray Farmer take an UNDER 8's into the SBMSC to join Jamie Stone's UNDER 10's.

Off the field, Ian Mitchell became our 3rd treasurer taking over from Kevin Dawson while the club formed a new event's sub-committee to look after the many increasingly important social and fund rai…
Read more